We have listed down the best performing suburbs in terms of Capital growth and rental yield in the Below States in Australia: 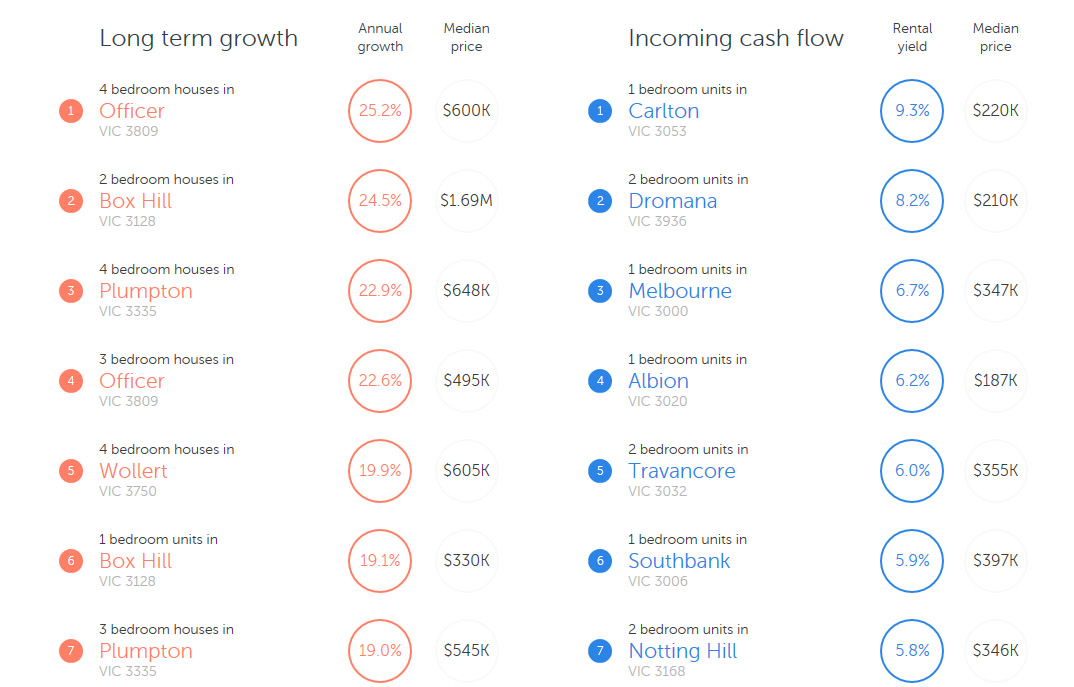 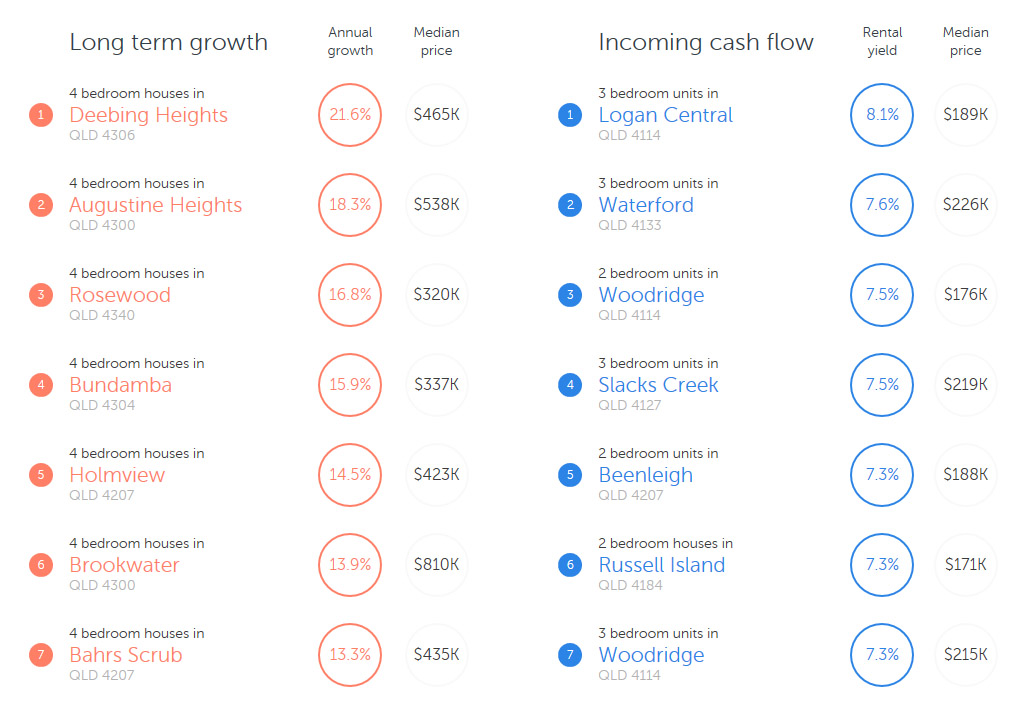 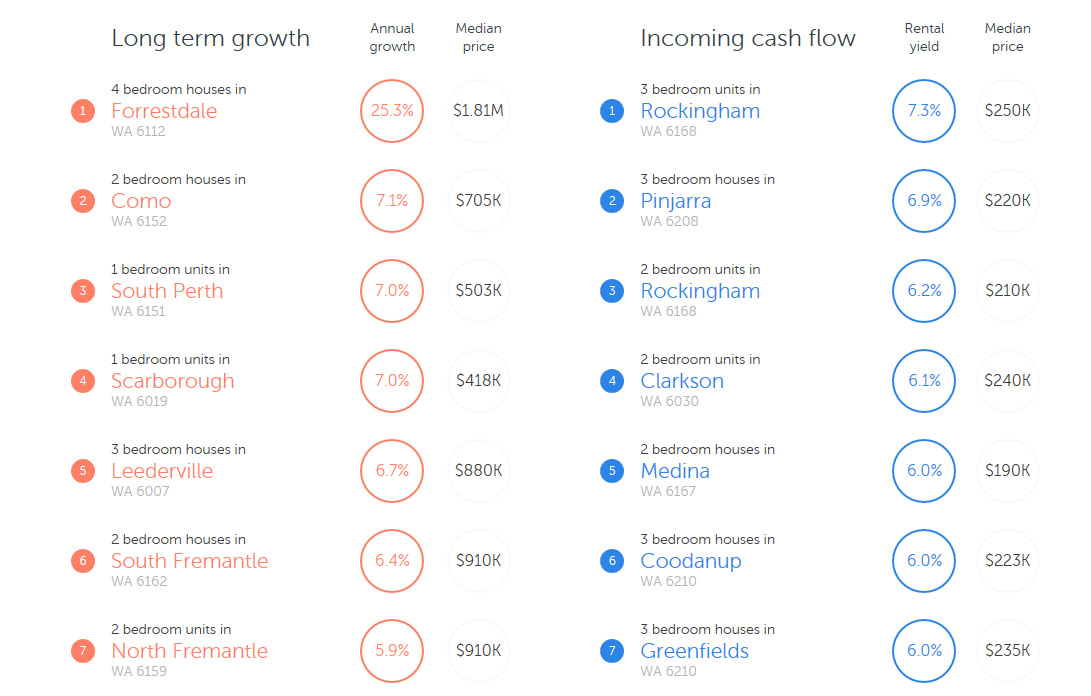 Population change is the key driver of demand. When an area becomes popular more people want to live there. Given there are fewer dwellings than interested parties, prices increase. Conversely, when the population declines and there are more dwellings than people, prices decline. The Australian Bureau of Statistics (ABS) publishes figures on population growth after each five-yearly Census. Generally trends in population growth don't change rapidly.

The other driver is availability of land. Natural geography limits this, while in other areas such as the ski fields it's limited by National Parks. Things that do change population growth rapidly - and provide investors with opportunity - are changes in immigration quotas, changes in infrastructure making areas more or less attractive and accessible to live in, and changes to employment such as the booming resources industry.

2. Affordability and availability of money

Affordability is the relationship between housing prices, interest rates and wages.

It's the cost to the owner or investor to retain and enjoy a property. When prices, interest rates and wages reach a ceiling in a particular area, residents often realise they can have a better lifestyle elsewhere. A good example of this has been the rapid migration of Sydney homeowners moving into the Brisbane and Gold Coast regions. This, in turn, has raised prices significantly in Brisbane to the point where the median price is almost on par with Melbourne.

The current boom in natural resources being mined, harvested and extracted to fund international infrastructure - especially in China and India - has increased the demand for skilled and semi-skilled workers.

Unlike some other industries, the mining industry pays most of its workers high salaries and demand for these workers is driving salaries even higher. These workers are then seeking to improve their lifestyle by buying bigger and better homes, or maybe an investment property or two. In Perth, Darwin, parts of Queensland and other mining areas there are whole suburbs, towns and cities of people with the ability to afford more.

Infrastructure is always a major driver for price growth when it increases the attractiveness and amenities of an area. The benefits of infrastructure are generally recognised after the changes. Here are a few examples:

The population shift towards waterside living has pushed prices up in all capital cities and many coastal regions.

This trend is continuing and has resulted in waterside investors obtaining greater returns.

Over the next 5-10 years most Baby Boomers are expected to retire from the workforce and look to move to the seaside in order to improve their lifestyle. They will also need income and many have responded in surveys that they intend to buy investment properties.

This may include consideration of commercial property investment as they can use their super scheme to invest; it's easier to manage than residential property and has greater returns.

Put a number of these drivers together and you have an extremely good understanding of what's going to drive price growth. Having identified these areas, careful homework may reveal good cash-flow returns as well. 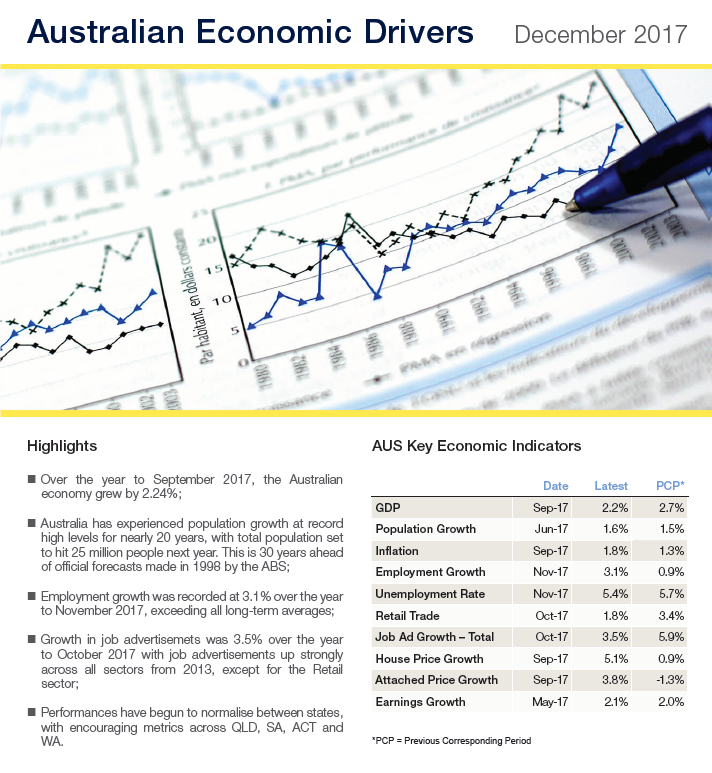 Housing approvals are a leading indicator on housing completions, with generally being about as 12 month lag between when a residential project receives approval to be constructed and when that project is actually completed and enters the housing stock. Our analysis also suggests that about 94 percent to 95 percent of residential dwellings approved in NSW and Victoria in one year are completed in the next, as some projects fail to reach or finish the construction stage for a variety of reasons, including change of plans by the proponent, inability to secure finance, etc.

It also seems that for every 10 residential dwellings completed, the housing stock only increases by about 9, which reflects the fact that not all housing developments are constructed on vacant land. That is, it appears in about 10 percent of cases an existing dwelling is demolished in order to construct a new residential property.

There has been a noticeable increase in the number of residential dwellings approved in NSW since 2009, with Victoria following a similar trend from 2013. For the period 1986 to 2016 average annual building approvals for residential dwellings was about 43,600 and 41,500 for NSW and Victoria respectively. Since 2013 approvals, particularly for multi-unit dwellings, have increased dramatically, averaging 57,400 and 59,900 for NSW and Victoria respectively

The number of approved sales of residential property to foreign investors has increased dramatically since 2010, albeit they total less than 40,000 transactions per annum5. At the end of June 2016 the total stock of houses in Australia was approximately 9.7 million, which means sales to foreign investors represented only 0.39 percent of the total housing stock in that year. However, this is a significant increase to historical transaction rates, which averaged about 0.05 percent of Australia’s total housing stock per annum between 1988 and 2009.

While these volumes may appear small, is well understood in economics that prices are determined at the margin, and if this small investor cohort is impacting house prices at the margin then their influence could be more significant than the volume of transactions indicates. FIRB annual reports indicate that Chinese investors have progressively increased their importance as a cohort of buyers of residential properties in Australia over the past five years to now represent about 25 percent of all foreign purchasers of real estate in Australia (by value).

Over the past 25 years lending to investors to purchase residential property has lifted from about 15 percent of total lending to purchase residential property to 38 percent today. Lending to property investors peaked at 45 percent to total lending in May 2015, and then dropped 33 percent over the subsequent 6 months. This drop in lending to investors was influenced by the introduction of new rules by the Australian Prudential Regulation Authority (APRA), which required higher capital reserves and limits in annual growth for investor lending.

Despite the introduction of these additional prudential controls, investor lending continued to rise again during the remainder of 2015 and 2016, albeit peaking at 39 percent. APRA have recently required banks to restrict interest-only loans to be no more than 30 percent of new residential mortgage loans, which is likely to assist in the curtailing of growth to this cohort.

Despite a few periods where the inflation adjusted cash rate rose, there has been a strong downward trend in real interest rates in Australia over the past 30 years. Currently, due to the combination of low cash rate settings and below RBA target band inflation, real interests rates have been sitting at less than 1 percent since the end of 2012, and by the end of 2016 were essentially zero.

This trend is not unique to Australia. The combination of expansionary monetary policy settings post-GFC and a low inflationary environment around the global has resulted in near-zero or negative real interest rates in many jurisdictions.

There is also a growing consensus amongst central bankers that this period of low interest rates is coming to end. Increased demand for funds from governments to finance infrastructure and other public sector capital spending is causing government bond yields to rise.

The ABS Population Projections anticipate the working age population ratio for both NSW and Victorian will to continue to fall over the next 5 years, dropping from 65.4 percent to 64.1 percent and 66.1 percent to 65.1 percent respectively between June 2016 and June 2021.

Sign up for regular updates on the propert market from Grit Property Group.